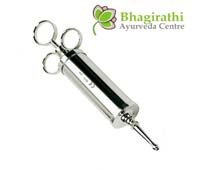 Basti has the reputation to be half of the entire treatments that can be available to provide substantial cure and relief. Out of the five essential therapies Basti is quoted as the most important in Ayurveda healing. This is because this specific therapy supports significantly in balancing the vitiated Vata Dosha, which alone is responsible for 80 types of disorders.

It is considered as the mother of all treatments, as it cleanses the accumulated toxins from all the three Doshas, especially the Vata toxins, through the colon. This is much needed because not only does the Vata dosha cause majority of diseases in the human body, yet due to its mobile and erratic nature, the Vata dosha moves the other two doshas viz. Pitta and Kapha from one part of the body to another and thus aids in their disturbance and implementing symptoms in the form of an ailment. It is for this reason that Vata dosha has to be balanced so as to cure the disease as well as stay clear of the same.

Basti means ‘to stay’. Basti is also observed as urinary bladder. In earlier times, the bladder of goat or other animals was used to give enemas; therefore the name was given on the name of useful equipment. Now a day metal or fibre enema pots and syringes are used to administer medicated decoctions and oils into the intestines of the person.

In this procedure, medicated oil or ghee and herbal decoction is given as enema. It is usually recommended for 8 to 30 days, based on the medical condition of a person.
Basti is having two actions: expelling the vitiated Doshas (morbid substances/toxins) and nourishing the body. Its first major action is related with the facilitation of excretion of morbid substances responsible for the disease process into the colon from where they are evacuated.

Vata can also cause imbalance of chakras resulting in various problems. Basti helps to bring the chakras back to normal thus balancing the energy levels. It removes unwanted materials from the cells and improves immunity.

• Ayurveda justifies the efficacy of Basti karma with its possible outcome to balance all the three Doshas viz. Vata, Pitta and Kapha. This is because whereas Basti balances Vata Dosha, also when the Vata dosha is balanced, the other two Doshas i.e. Pitta and Kapha would be balanced impulsively.
• It also nourishes and feeds the colonic flora.
• Basti also enhances the immune system of the individual by cleansing and nourishing the colon.
• Basti puts the body into a state of total balance by nourishing the base Prana of the body which is formed in the colon.

• Anuvasana Basti: If the roots of the tree are filled with water, it also fills the tree with leaves, flowers and fruit. Similarly, inside the detoxified and purified body (from which the aggravated doshas have been removed), this particular Basti provides vigour, vitality and strength to the body. In this method of treatment, medicated oils are given in enemas that lubricate the body tissues. It works by purifying and nourishing the seven dhatus (body tissues) inside the body viz. Rasa, Rakta, Mamsa, Meda, Asthi, Majja and Shukra (plasma, blood cells, muscles, adipose tissues, bones, bone marrow and semen) Dhatus (body tissues). Furthermore it helps in holistic healing and thus enhancing the total health of the individual.
• Asthapana Basti: It is also called as ‘Niruha Basti’. This basti helps in removing the Doshas which are stuck inside the body tissues. Judging by the form of the disease, properties and actions of the medicines to be used, time of the day, type of the season and whether the patient is strong enough to respond to the treatment, this Basti, when given to the patient, purifies all the body pores. More often Asthapana Basti is given in the disease of the large intestine and the digestive tract.

1. Anuvasana (oil enema): It is used in pure Vata disorders and when a person is having excess hunger or dryness related to Vata imbalances.
2. Niruha or Asthapana (decoction enema): It is used in other conditions, such as nervous diseases, gastro-intestinal Vata conditions, gout, certain fever conditions, unconsciousness, certain urinary conditions, appetite, pain, hyperacidity and heart diseases.
3. Uttara Basti (through the urethra with men or vagina with women): It is used for selected semen and ovulation disorders and for some problems involving painful urination or bladder infections.
4. Matra Basti (daily oil enema): It is used by someone emaciated by overwork or too much exercise, too much heavy lifting, walking too long a distance, too much sexual activity or someone with chronic vata disorders. It does not need to be accompanied by any strict dietary restriction or daily routine and can be administered, in the appropriate cases, in all seasons. It gives strength and promotes health.
5. Karma Basti (schedule of 30 bastis)
6. Kala Basti (schedule of 15 bastis; 10 oil + 5 decoction)
7. Yoga Basti (schedule of 8 bastis; 5 oil + 3 decoction)
8. Bruhana Basti (nutritional enema): It is used for providing deep nutrition in select conditions. Traditionally, highly nutritive substances have been used, such as warm milk, meat broth, bone marrow soup and herbs like Shatavari, Vidari, Ashwagandha etc.