It is 300 kilometers from Pune. Maharashtra state is known for its abundance of Buddhist caves – about 800 of them spread across various districts. But of these, the 32 caves at the World Heritage Site of Ajanta stand out distinctively and attract tourists in large numbers because of their architectural splendour, Buddhist legacy and artistic masterpieces, including narratives painted on the walls of ‘chaityas’ (prayer halls) and ‘viharas’(residential cells). The caves include paintings and sculptures described by the government’s Archaeological Survey of India as “the finest surviving examples of Indian art, particularly painting” and these are representative of Buddhist religious art with figures of the Buddha and depictions of the Jataka tales.

A cluster of 32 Buddhist caves not far from a medieval village of the same name, the site is a protected monument in the care of the Archaeological Survey of India. Moreover, since 1983, the Ajanta Caves have been declared a UNESCO World Heritage Site. The caves located here can be chronologically divided into two phases viz. the early Buddhist caves of 2nd century BCE to 1st century CE and the Mahayana caves dating to 5th century CE. Among the early caves, 9 and 10 are ‘chaityas’ which comprise the earliest known remnants of paintings in the history of India while 8, 12, 13, and 15A are ‘viharas’. Caves 19, 26 and 29 are chaityas of the Mahayana period and all the other caves are viharas.

A chaitya is a Buddhist shrine housing a stupa. In modern texts on Indian architecture, the term chaitya-griha is often used to denote an assembly or prayer hall that houses astupa. A vihara is the Sanskrit and Pali term for a Buddhist monastery. It originally meant a secluded place in which to walk, and referred to dwellings or refuges used by wandering monks during the rainy season.

Ajanta is located on an ancient trade route known in ancient literature as ‘Dakshinapatha’. Most of the donors at Ajanta, especially of the earlier caves, were traders. The site received support from the mightiest donor during its second phase and that was the royal patronage of the Vakatakas. There are more than 100 inscribed and painted inscriptions narrating stories of these donors that also included monks, kings, ministers, and others. Ajanta is known for its narrative murals based on Buddhist themes like life scenes from the Buddha, Avadana stories of Bodhisattva, Jataka stories and panels based on Mahayana themes from Vipulya Sutras.

The monastery continued functioning here at least till 8th century CE and then the site was forgotten till its rediscovery in 1819. Ajanta has been a recipient of the legacy of the Gandhara and Mathura schools of art of the Kushana period; the Sarnath school of art of the Gupta period; and the Amaravati school of art of the late Satavahana and Ikshvaku periods. In fact, Ajanta has left a deep impact on other Buddhist caves found across western India. 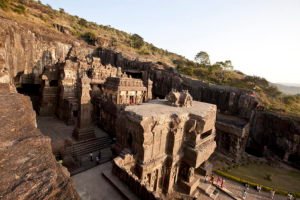 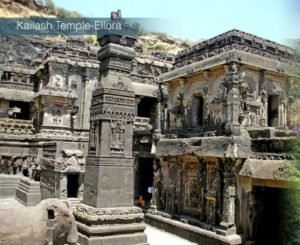 These 34 monasteries and temples, extending over more than 2 km, were dug side by side in the wall of a high basalt cliff, not far from Aurangabad, in Maharashtra. Ellora, with its uninterrupted sequence of monuments dating from A.D. 600 to 1000, brings the civilization of ancient India to life. Not only is the Ellora complex a unique artistic creation and a technological exploit but, with its sanctuaries devoted to Buddhism, Hinduism and Jainism, it illustrates the spirit of tolerance that was characteristic of ancient India.
The caves at Ellora were carved out of the vertical face of the Charanandri hills between the 6th and 10th centuries. The carving work began around 550 AD, about the same time the Ajanta Caves (100km northeast) were abandoned.

The Ellora Caves were built at time when Buddhism was declining in India and Hinduism was beginning to reassert itself. The Brahmanical movement was especially powerful under the patronage of the Chalukya and Rashtrakuta kings, who oversaw most of the work at Ellora – including the magnificent Kailasa Temple built in the 700s.

The last period of building activity took place in the 10th century, when the local rulers switched allegiance from Shaivism (Hinduism devoted to Shiva) to the Digambara sect of Jainism.
The coexistence of structures from three different religions serve as a splendid visual representation of the prevalent religious tolerance of India. For this reason and others, the Ellora Caves were designated a UNESCO World Heritage Site in 1983.

The Buddhist caves (also called Vishvakarma caves) are the earliest of the Ellora Caves, dating from 500 to 750 AD. All except Cave 10 are viharas (monasteries), which were used for study, meditation, communal rituals, eating and sleeping.

The caves become steadily larger and more elaborately decorated as they progress to the north, which scholars have explained by the growing need to compete with Hinduism for patronage. The earliest Hindu caves at Ellora date from 600 AD, right in the middle of the Buddhist period.